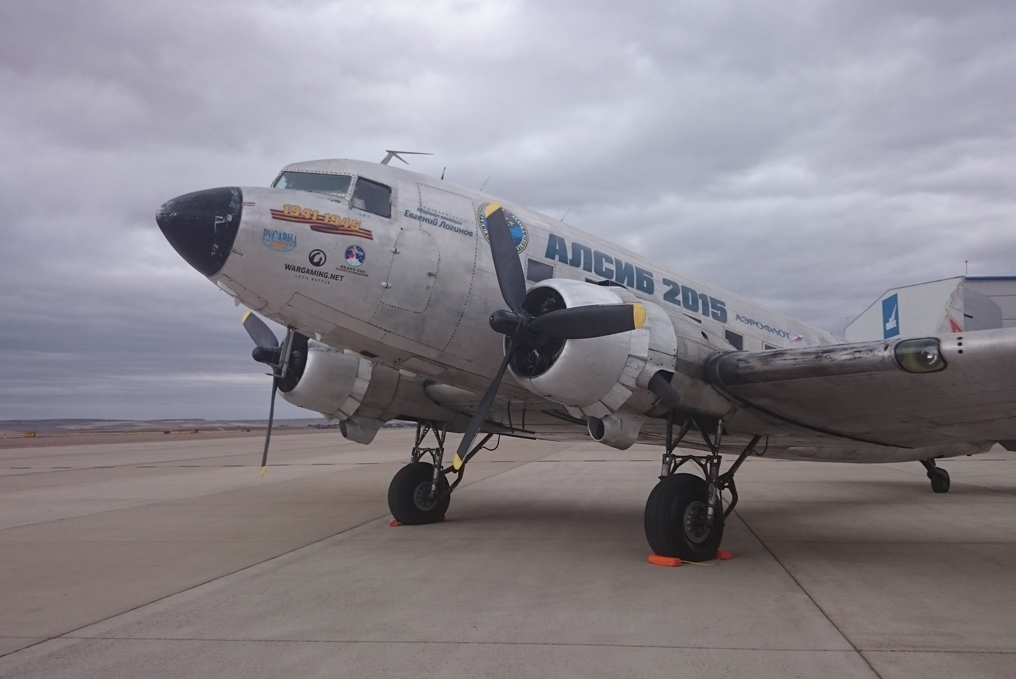 Despite its name, the Alaska to Siberia route starts in the small city of Great Falls, Montana, located not far from the Canadian border. Even now the population of the city is only 60,000, and in the middle of the 20th century it was considered to be wilderness. Yet this was a staging area where Lend-Lease aircraft were gathered for delivery to the U.S.S.R.

Unlike many other places, where airfields had to be built from scratch and fuel had to be delivered on dog sleds, Great Falls already had a runway and two hangars when the war started. It is an interesting fact that these two hangars, though revamped, stand in the same place and are used as workshops.

For a small city like Great Falls, the news of World War II aircraft landing here again, 70 years later, quickly turned into a sensation. It was announced in the newspapers, posters were put up around the city, and word of mouth worked at full capacity.

The aircraft arrived modestly every few hours. The weather conditions were difficult: high cloudiness, very strong wind, and occasional light rain. There was a high chance that the aircraft would have to land elsewhere and wait out the rough weather. Fortunately, everything went well.

The good news was that we didn’t have to wistfully peer into the overcast sky for the entire 10 hours at the airfield. We met several interesting guests.

The first to arrive were the Canadians who flew in the T­6 Texan II. It is worth noting that this aircraft, developed in the early 1990s, is a successor to the T­6 Texans that were supplied to the U.S.S.R. along the ALSIB route. The Canadians refilled the fuel tanks, smiled for the cameras, and resumed their route.

The next to arrive was the Bell P­63 Kingcobra, the star of the day. Out of the total 3,303 fighters of this model, 2,397 were sent to the U.S.S.R. Only two active aircraft are left from this “cobra family”, and one of them was right here in front of us. A smiling tanned pilot jumped out of the cockpit, “Hi! My name is Todd. I am not a pilot. I’m an aircraft mechanic.” “If you flew by yourself, then you are a pilot,” we said smiling in return.

Todd invited everyone to take a seat in the cockpit. It turned out to be so cramped that a tank’s fighting compartment would seem a luxury suite in comparison. Besides, the sheer number of panel controls was enough to make you dizzy.

This aircraft boasts an unorthodox layout, with the engine installed in the center fuselage, behind the pilot. It carries a 1.45 inch (37 mm) nose cannon—an extremely powerful weapon for a fighter, which enabled it to operate as a ground-attack aircraft in World War II.

The following arrival was one of the best known U.S. aircraft: the legendary P­51 Mustang. For Americans, this iconic name speaks for itself.

The much-anticipated AT-6 Texans piloted by the U.S. flight team of Bravo 369 Flight Foundation were the next to land in Great Falls. Although the AT-6 Texan was designed as a trainer aircraft, it was conceived for advanced trainees and it required considerable skill in handling, said Sergey Burkatovskiy, Wargaming’s Vice President of game design, who arrived with Bravo team as a second pilot. As we found out, the lead game designer of World of Tanks is a great enthusiast of military aviation history. He had completed a flying course especially to co-pilot this warbird. Sergey’s inspired account of his experience in the AT-6 Texan sounded like a dream come true.

The beautiful C-47 Skytrain piloted by Rusavia crew concluded the series of arrivals. This military transport aircraft was extensively used in World War II and subsequent 20th century conflicts. Its imposing appearance inspired respect but it somewhat faded beside the Hercules, a modern-day giant which just happened to stand nearby.

That was all for today. We need to get ready for tomorrow’s events. In addition to local residents, we expect quite a number of important guests to visit the legendary warbirds: the Great Falls City Mayor, the Montana State Senator, and the Russian Ambassador to the U.S.