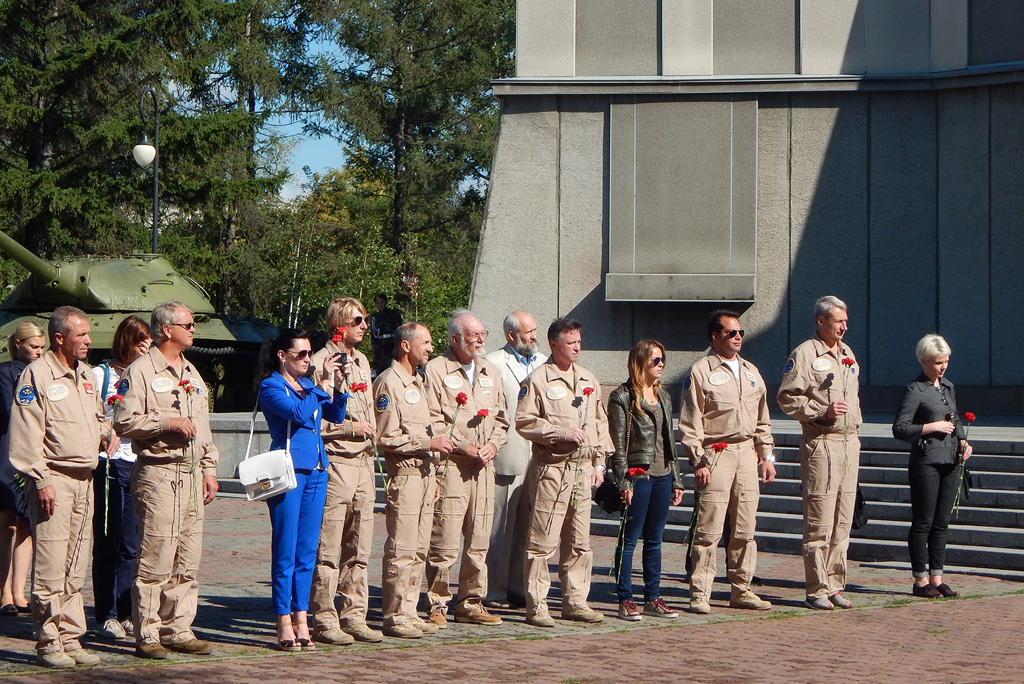 After covering thousands of miles, we finally touched down at Krasnoyarsk—the endpoint of the Alaska to Siberia route, known as the Krasnoyarsk air route in the U.S.S.R. during World War II. From Krasnoyarsk, the aircraft were sent to different fronts. Bombers and transport aircraft could normally reach troop positions themselves thanks to their flight endurance. Fighters, in contrast, were partially disassembled and transported by railroad, which preserved the service lives of the engines.

We couldn’t have had a warmer welcome in Krasnoyarsk! It was a real celebration with a traditional Slavic bread-and-salt ceremony, guards of honor, an orchestra, and journalists. Besides this, a number of social events were in store for all arrivals: a sightseeing tour of the city, a visit to the Memorial of Victory museum as well as meetings with veterans and young people. At the museum, we learned lots of new facts about the role of Krasnoyarsk and the Krasnoyarsk region during World War II, in particular, the Alaska to Siberia project. Back then, the local airport had a developed infrastructure: two concrete runways, four hangars, a number of service facilities, a maintenance depot, a garage, and an oil and water heater. The maintenance of warplanes was performed by the special airfield service squadron. The airport also hosted the Kharkov Military Aviation School, evacuated to Krasnoyarsk at the beginning of the war. In the repair shops of the School, warplanes were maintained and painted before they were sent to the front line.

One of the most terrible tragedies on the Alaska to Siberia route took place in Krasnoyarsk during the early days of the ferrying operations in 1942. The first group of aircraft from the U.S. arrived in Krasnoyarsk. The next day, November 17, the pilots were to leave the city on a Li-2 transport aircraft—based on the American Douglas—to ferry another group of aircraft. Once the plane gained the necessary altitude and set its course, it started to bank to the right. Immediately after the pilots leveled off the plane, it suddenly banked to the left, pitched down, and crashed into the ground from a height of 650 feet. The wreckage burnt to ashes. The probable cause of the crash, that took 20 lives, was icing. To commemorate the perished, a monument at the cemetery not far from the Memorial of Victory museum was erected.

This is just one tragedy of the harsh route. How many more have there been in air and on land? The more you learn and the deeper you plunge into the history, the more appreciation you develop for people of the past. Construction workers who toiled to build airfields and infrastructure, mechanics who spent day and night under airplanes to prepare them for missions, pilots who performed long-haul flights over unfamiliar terrain in the hardest conditions imaginable, as well as many others too numerous to mention. All of them are true heroes worthy of our eternal respect and imperishable memory…

We are delighted to see young people alongside World War II veterans at our events. It looks like our project is achieving its goal of establishing a new link between generations. We all have something to learn from our great predecessors: courage, determination, selflessness, and faith in the cause. The Alaska-Siberian air road is an outstanding example of teamwork and friendship. We believe that preserving the memory of these inspiring accomplishments can help promote mutual respect and cooperation today.

We owe a huge thank you to everybody involved with the project: those who helped make it happen, as well as all who followed our flights and kept their fingers crossed for us. We are extremely grateful to the cities where we stopped on the route for cordial receptions and all the support.

Thank you, dear friends! See you in Moscow at the MAKS-2015 air show!